The Average Cost of Living in Ontario in 2020

There are numerous factors to consider when determining how cost-effective a city or province is, in comparison with other cities and regions in Canada. One of the factors that determines the cost of living in Ontario is the income you generate vis-à-vis your predicted expenses in terms of housing, food, transportation, and other living expenses

Ontario is one of the ten provinces of Canada and located in the east-central area of the country. Ontario’s largest city and capital is Toronto, and equally, the province of Ontario is home to Canada’s capital, Ottawa. The Ontario province is ranked as the second-largest in terms of total area and has the highest provincial population.

Average wages in Ontario (What a good salary/ income would be?)

The average salary of an individual in Ontario and what could be regarded as a good salary is a factor of the kind of your career. Your salary structure is dependent on your job titles, as well as your location and various living expenses.

This salary structure includes housing, transport, food, and other benefits, and varies between different professions in the state. Thus, the lowest salary earned in Ontario is C$2,140 per month and the highest being around C$69,900 per month.

Meanwhile, salaries vary significantly across the Ontario province, with each city or municipals, and each profession has its unique salary structure. For instance, the good average salary for an engineer is different from what a cook will earn. Similarly, the cost of living for Toronto varies from the cost of living in Ottawa, which is in the same state or province. 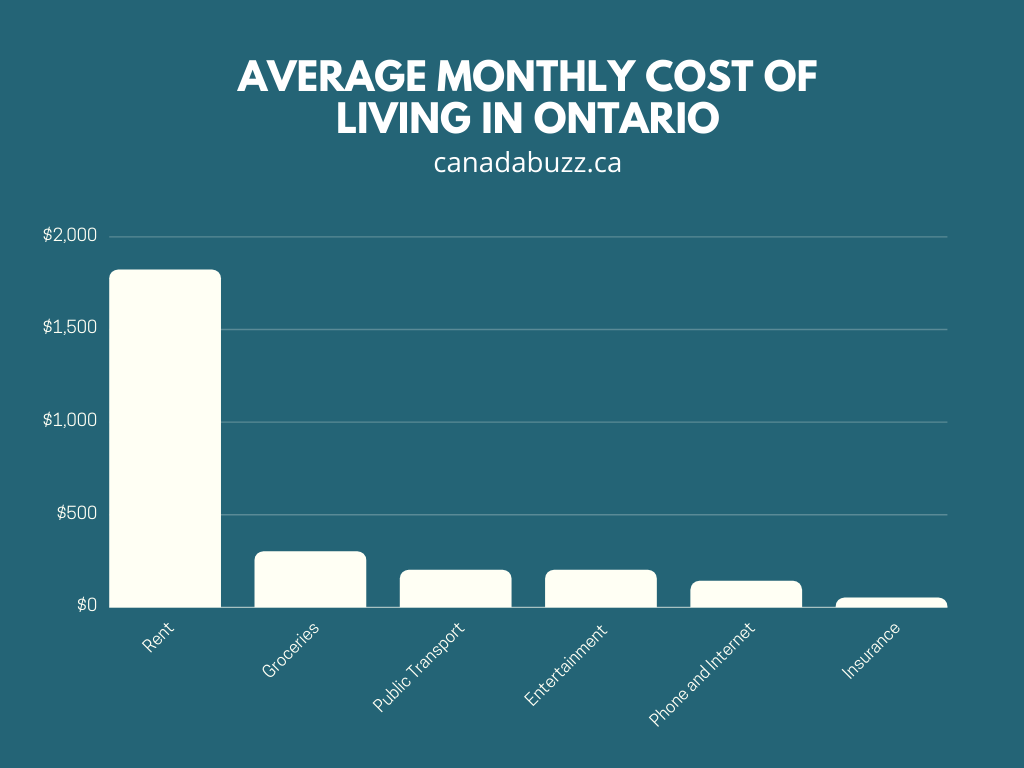 An Ontario housing and rent price varies widely between the different cities in the province. The cost of an apartment or house in Toronto will be different from the value of the same type of property in cities like London, Oshawa, Hamilton, and Ottawa. Also, these prices change from year to year as a result of many financial and economic factors and government policies.

Toronto is the largest city in Canada and equally the most expensive to live in Ontario, and to a greater extent, one of the most expensive in Canada. The average cost of living in Toronto depends on a number of factors, ranging from housing cost to the cost of food and groceries, and cost of everyday living.

For instance, a furnished apartment of 85 square-meter sizes in a regular or average area in Toronto is expected to cost a little above C$2200 per month, and additional cost for utilities. This implies that it is now more expensive to find affordable housing in Toronto than other cities like London, Brisbane, etc.

The capital of Canada, Ottawa, has better living affordability, compared to Toronto, but it is still ranked among the highest in Canada. As a result of its mega status, the city of Ottawa is home to a lot of government officials and attracts different kinds of people every day. For instance, the monthly rent for a furnished 85 squared-meter apartment can cost around C$1500 and over C$140 monthly utility cost.

Food prices and entertainment cost is a bit cheaper than the average in Toronto. According to the city of Toronto Nutrition Food Baskets Calculator, a single man of around 19 to 30 years old spends about $65 per week on food, while a female counterpart of the same age range spends around $51 per week. A couple of the same age will spend around $120 a week.

The price of food, farm produce, and groceries is a bit expensive in Ottawa than other Canadian cities.

How Many Credit Cards Should You Have in Canada?

Best Bank in Canada for Savings

Cost of Living in Canada for International Students 2020